Back to all posts

Comfort and Caregiving at Mountain Trace 2015

"you filled me with music"

"you made my day"

"this is God's gift"

"you can stay as long as you want”

These were just some of the quotes from patients as the Dulcimer U students made their “rounds” at Mountain Trace Skilled Nursing and Rehab Facility.

Students in this year’s Comfort and Caregiving class were a typical group of dulcimer players with varying background and experiences.  Some students came with a lot of experience playing for the elderly, mostly in a group setting, and some had little to none!  But all said they learned so much about using the dulcimer in a healthcare, giving environment and decided the field trip was the “icing on the cake” to fulfilling their goals from the class.

The Story of the Hands:

The Dulcimer U student was assigned a room for a middle-aged gentleman who was in the nursing home for rehab.  Our primary goal was to lift this person’s spirits through music.  As the music began, there were tears of joy and he commented many times how much he loved music and what a treat it was to have the musician live in his room. He also had a roommate and we asked the roommate if he wanted to hear the music, which he replied he did, so we opened the curtains.  The roommate was due a visit from his wife, who was down the hall in another room, having been admitted the night before.  The nurse brought the wife into the room and assisted the elderly patient into his wheelchair so he and his wife could “share the music” together.  As soon as the music and singing began, they joined hands and remained together throughout the remainder of the visit.  There was conversation between the man and his wife and the roommate and the dulcimer player(s).  The picture was captured with their permission.  The picture is representative of the beautiful efforts of our students and the positive response from the patients at the Mountain Trace Nursing and Rehab, and the results of a weeklong preparation in the Comfort and Caregiving with the Mountain Dulcimer class. 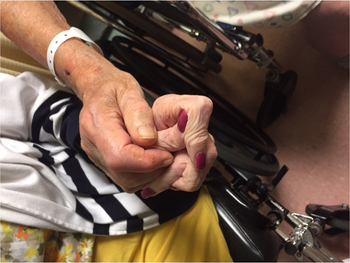